What progress are we making towards change to reduce immigration detention? This was the main question we asked ourselves with European Alternatives to Detention (ATD) Network partners, when we met for our fourth regular meeting last week in Brussels.

The context is difficult, with intense political pressure to resolve the perceived crisis of migration in the region. While EU policy is promoting more and longer detention to increase returns and prevent secondary movement, several countries are planning expansions of the use of detention. Effective opposition to detention is becoming harder and harder, as governments feel that they have no option but to do something.

Set up in March 2017, the European ATD Network is a space for strategizing for a different future to the looming dystopia of widening mass detention in Europe – because to achieve reform away from immigration detention, we believe we need to both make it a political problem and provide solutions. The Network links NGO partners running case management ATD pilots in Bulgaria, Cyprus, Poland and the UK, with IDC and PICUM.

We started by developing a shared theory of change, setting out how implementing small alternatives pilots in four countries could build learning, evidence and momentum to work towards the expansion of alternatives and reduction of detention. We sought to address key barriers in Europe: a lack of practice and evidence on engagement-based ATD and limited NGO buy-in for solutions-based advocacy around alternatives.

It was and is a challenging strategy.  Can small NGOs, doing structured case management with small numbers of migrants in four countries, really be the seed for wider change across a Europe increasingly in thrall to populism and xenophobia?

Left to themselves, governments are likely to propose ever more extreme forms of coercion and detention, because those are the tools that they have. Can civil society alternatives to detention, based on high quality case management, show that engagement with migrants in the community works better for everyone?

Almost two years on, though geopolitical optimism in general is in even shorter supply, the Network is seeing real progress on our strategy. Momentum around alternatives is building: the European Commission is putting significant political investment into alternatives involving civil society, while a range of regional, national and local stakeholders are increasingly exploring, promoting and collaborating around ATD.

And we now have evidence to point to: EPIM’s first independent evaluation of pilots shows that 97% of migrants stayed engaged – in countries with often high overall rates of secondary movement – and that case management had a positive impact towards case resolution in 88% of cases. The qualitative findings are helping us frame the discussion with decision-makers to address the full complexity of strengthening immigration systems, rather than being limited to crude metrics of short-term return numbers.

But less obvious achievements are equally significant. The Network has become a hub of learning among trusted allies and beyond. Last week in Brussels, we exchanged with NGOs from a host of other countries who are working on ATD as a strategy – from Greece and Lithuania to Belgium and Slovakia. This national-level civil society engagement is crucial for getting governments on board with alternatives that can really lead to detention reduction.

We’ve seen this in the UK, where strategic campaigning linked with advocacy around an ATD pilot has been successful in achieving change. In July 2018, the government made a high-profile commitment to fund further NGO-led alternatives projects as part of detention reform which has already seen the numbers of people in detention reduce by 40%.

There are many ongoing challenges to wrestle with, not least how we can develop alternatives in complex political contexts and work with migrants towards resolving their cases, when there are very few options. It’s also a long-term strategy, as the UK experience shows.

But despite these challenges, levels of confidence at our Network meeting were high. At a time when there’s unprecedented pressure to detain regionally, there was a sense that this growing movement on alternatives could be a catalyst for change – towards migration management systems that produce better outcomes for migrants, communities and governments without relying on detention.

The European ATD Network is supported by EPIM.

Action Access: A New Alternative to Detention Pilot for Women in the UK
Scroll to top 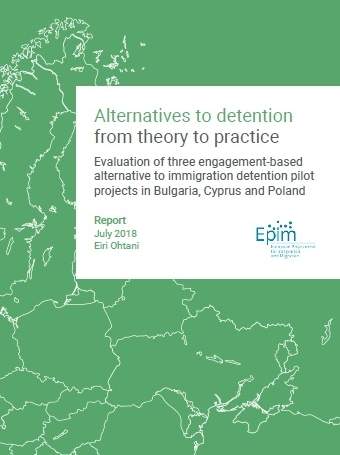